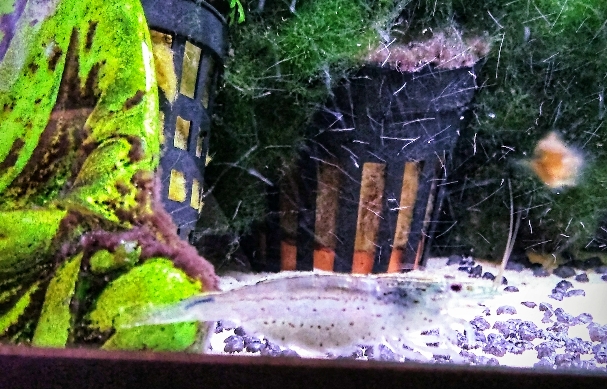 This is takeshi, our amano shrimp. He lives peacefully with a load of platies and snails.

He's getting on a bit, I think he's about 2 years old. He's got very brave in his dotage, zipping and bouncing around the tank like a pup - on leaves, on ornaments, on the thermometer, on the glass. At the moment his favourite spot is the filter which has a lot of tasty algae.

I originally got him to clean up the string algae. To start with he'd just hide under the bridge like a dragon without a hoard, you'd see his long tentative whiskers and he'd quickly run out, get a flake, and rush back.

I'd put some string algae under the bridge for him but he just wasn't interested. As he got settled he went through his bat phase, upside down under the bridge, poking his face out when he smelt feeding time.

He ventured out to a corner and discovered Buddha (pictured). he spent a lot of time eating small, sorry smol, bits of algae, gradually cleaning Buddha as the rest of the tank got overrun with string algae (I'm sure there's a metaphor here about worship and meditation! )

While writing this I just had to play with the filter as it stopped pumping air out, but takeshi is so brave that he just stayed on the filter as I was jostling him about.