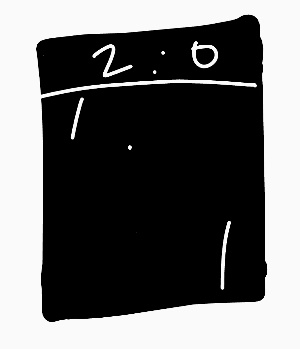 I don't really see myself as a gamer but computer games have always been a big part of my life. This post has turned out to be quite autobiographical which is nice.

We got a pong clone at a car boot sale in the 80s. I can't find the model online. It had a cowboy style light gun. Had a lot of fun playing that with my brother. There was tennis, hockey, maybe squash and football but it was all sticks and squares

I hated my spectrum. It was hooked up to a separate cassette player and after 5, 10 minutes and listening to that loading noise it would frequently crash. Even when they did load the games I had were awful. Matchday 2 - a football game where it was hard to distinguish the players from the pitch and The Never-ending Story - a text adventure where I couldn't seem to do anything.

One day I smashed the spectrum up with a hammer.

This had a 5 1/4 inch floppy drive and a rudimentary OS not even windows 3.1. I lost a friend because he came round when I was playing a motorcycle game that didn't have a pause button and he went off in a huff before the end of the race. I ended up bricking this by accidentally deleting system batch files.

Ah Tetris dreams! An American kid at primary school became instantly popular when he brought in a brand new, newly released gameboy. It seemed like I waited years to get one. I loved super mario land. I borrowed bugs bunny off a friend and was so angry when I completed it and was just told

you are good player

There was an April's fool in mean machines magazine that super mario kart was being ported to the gameboy; we were so excited and then so disappointed.

A Japanese friend up the street said his dad had a color gameboy prototype in Japan. I thought he was lying but I wanted it to be true so much and I knew technology was amazing over there.

My great uncle had a master system for when his grandkids were round. He let us drink brandy and drunkenly play outrun. I thought it was like the arcade version.

My brother got one soon after. I can still hear the Alex Kidd theme tune in my head.

There was a platform game called psycho fox that I really liked. Got it second hand in a shop near Brighton seafront, same place I swapped my gameboy for a Super Nintendo. There was another shop called consolevania they had a near mythical neo geo. The holy grail of consoles.

We didn't have rockers vs mods at school. No, we had Sega vs Nintendo. Mario or Sonic. One or the other. Your identity and friendships depended on this.

We got a multitap so we could attach more joypads. Me my brother and our friends had a lot of fun playing bomberman and NBA jam over the years.

I bought this off a friend in sixth form to play columns. Good, but it wasn't Tetris. I still had this working until I sold it in 2012. By then it seemed so bulky and the screen tiny.

Dad got a decent pc in the mid 90s and I mainly played hearts and Yahoo games (when I wasn't looking at fake topless shots of Cameron Diaz). Oh we played theme hospital a lot in dad's crammed study.

I got a high powered 133mhz pc for uni, but i don't remember playing games on it. I did put mame on it I think; I played pinball action and bubble bobble mostly.

After uni got into the massively multiplayer online games a bit. I remember going to an internet cafe in Greece to log into my kings of chaos account. My friend's account too: he'd gone to the acropolis with his girlfriend.

I bought a game cube with a housemate because she wanted me to play monkey ball, that was a great game. Played mario kart and bomberman with friends too. I've still got the game cube I assume it still works but the games work on the Wii so don't need to check.

I like the stylus and dual screen on the DS, battery lasts ages. The 3d mario game was really impressive. I sometimes play meteos still - a really good Tetris derivative. And the Japanese card game hanafuda too. I remember playing zookeeper with a friend in Whitby; a group of us were on holiday there. Shame she moved back to Trinidad.

I've had the DS 18 years I think and it still seems more powerful for games than my phone.

One of the only consoles I've bought brand new. I still use this as a bluray and DVD player. I'm concerned that Sony will do an update that purposefully bricks it one day.

I could never be bothered with the big immersive first person games and just ended up playing bomberman, puzzle fighter (Tetris clone again), and a racing game.

I bought a megadrive collection game for my partner so she could play all the games she had as a kid.

First played the wii on holiday with friends in Brittany. That embodied immersion impressed me, even though I was never one to furiously move a joypad around in my hands.

A few years later I bought a Wii when me and my partner went on holiday to Cromer. I thought we'd get some more games there but only found quantum of solace at a market stall and that wasn't two player. She's much better at mario kart than me and sometimes calls our guinea pig shy guy beach (after one of the circuits)

I jailbroke the wii and put all the old Sega and Nintendo games on there (all the ones I owned officer, nothing to see here) my partner likes the old Disney games and I like sugoi hebereke, alfred chicken, and robocod.

We haven't played many games together over lockdown. None actually. We have been playing theme hospital over the years but she gets annoyed with how seriously I take hospital management "stop putting doctors in training" she'll say. But these untrained doctors shouldn't be anywhere near patients!

I've got loads of emulators on my phone but at the moment I'm just playing township, astrobotany and lines. I'm getting frustrated with township because they're doing more and more to trick money out of people. I'm a bit addicted to it and don't really enjoy it anymore.